At Eckler’s, we deal primarily with restoration and performance parts and accessories, so the subject of paint colors and codes doesn’t come up that often. But when it does, somehow Marina Blue always enters the conversation. It’s just one of those colors.

I remember being at a big car show a few years back. It was an all-GM show, with just about every brand of The General being present. I came across a couple of guys gushing over a pretty blue ’65 Impala. “Marina Blue – awesome color” I heard. Wrong-o. I also remember a buddy of mine, years ago, telling me that his buddy had a ’70 Cutlass in Marina Blue. Mmmm, sorry. I’ve even heard “knowledgeable” friends say they’ve seen ’68 and ’69 Chevelles in MB. Seems this color sure did get around a lot! 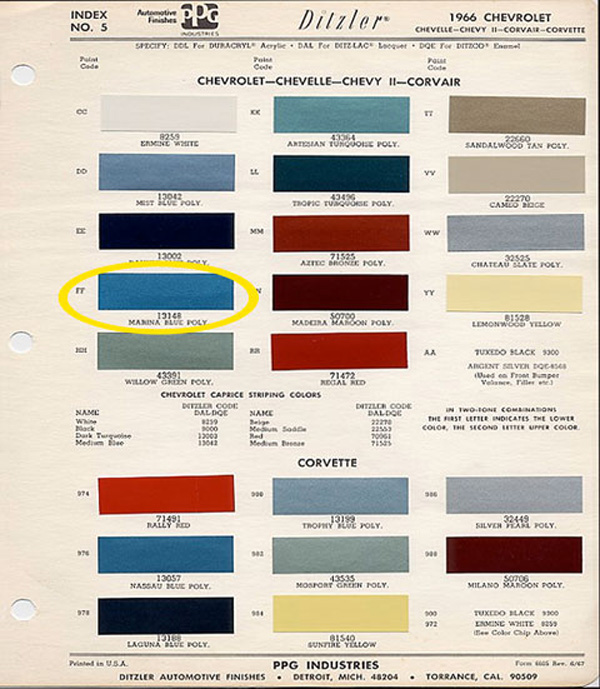 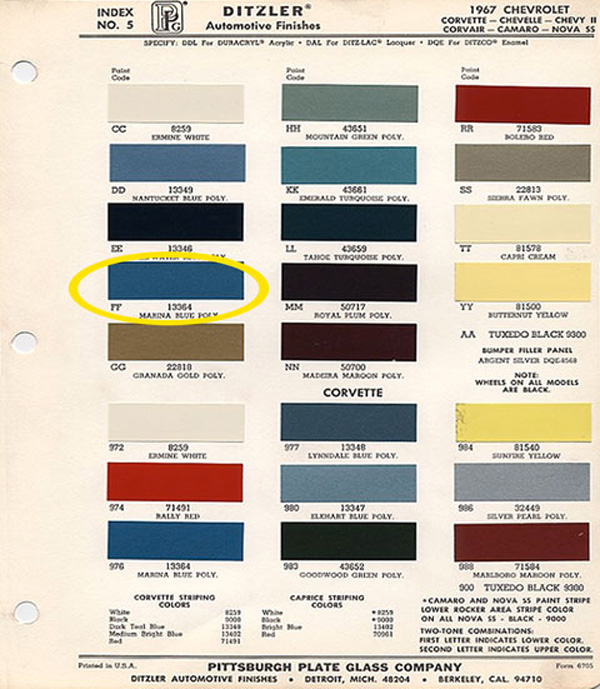 Truth be told, the Marina Blue name is reserved only for the Bowtie brand. And only for 2 short years: 1966 and ’67. Sure, Chevrolet was leading up to MB in ’65 with Nassau Blue and even Mist Blue. Marina Blue (GM code F) was officially introduced in 1966 models of full-size Chevrolet, Chevelle, Chevy II and Corvair. The Corvette got Nassau Blue – close. In ’67, MB was available on all Chevy models – full-size, Chevelle, Chevy II/Nova, Corvair, Camaro, and Corvette.

In 1968, the closest color to MB Chevrolet produced was Tripoli Turquoise. 1969 saw Azure Turquoise. 1970-’72 was Mulsanne Blue, getting ever further away from the legendary Marina Blue.

Of course, the really cool thing about paint colors back in “the day” was the variety. Just for a little time trip, log onto http://autocolorlibrary.com/ sometime. Check out any of the GM brands from the 1960s and early ’70s. Just about every year offered at least 3 or sometimes even 4 different shades of blue. Compare that to today’s offerings. Blue? Sure, probably. But just one shade, hey, let’s not get carried away!