You are here: Home / Camaro News / New Camaro Z/28 Outruns Its Own Tires

From MotorAuthority  by Nelson Ireson

It’s well known that the Chevy Camaro Z/28 has the widest front tires of any production car. At 305 mm wide, those tires produce tremendous grip–especially since they’re Pirelli P Zero Trofeo Rs. In fact, they make so much grip, the Z/28 was spinning the tire around the wheel under braking–the Z/28 was, in effect, outrunning its tires, or at least their ability to grip the wheels. 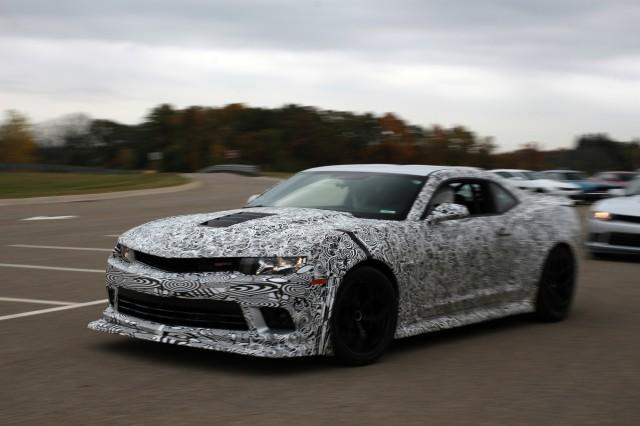 It’s an unusual problem for a production car, but it’s a good one to have–too much grip is just enough.

Part of the cause also comes down to the Brembo carbon ceramic brakes, which provide tremendous stopping power for the large but track-worthy Z/28. But regardless of the cause, Chevy had to find a fix for the tire-on-wheel slippage issue.

Typically, Chevy says the tire-wheel slippage issue is solved through the use of an abrasive paint along the bead of the wheel, where the tire seats. The Z/28 team tried this, and found it wasn’t enough to prevent the problem.

So they took it to the next level, using a racing solution: they media-blasted the rim of each wheel. That finally produced enough friction to keep the Z/28 from spinning the rubber around the metal.

Like the Flowtie, and the Flying Car Mode, this is just another small but significant piece of engineering that makes us appreciate the Z/28 that much more.