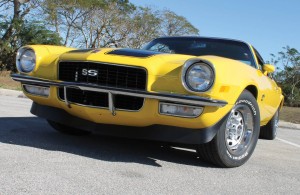 I purchased this ’71 Camaro SS from Jim Rathmann Chevrolet in Melbourne, FL. At the time, I was working at the local Publix grocery store and living at home and I needed reliable transportation. I ordered the car in March with almost every option available, and then talked my mother into co-signing for the GMAC loan. I wanted an SS because the Z/28 didn’t come with air conditioning, and after all, I lived in Florida. I also realized that big blocks wouldn’t be around much longer. I decided against the RS package, because the car was going to be parked in a grocery store parking lot, and I saw how people parked head-on there. Besides, I liked the full bumper look. 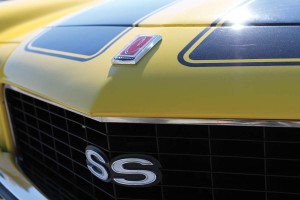 I haunted the dealership daily until May 21, 1971, when I finally took delivery. The car was my daily driver until 1973, when I received an appointment to the U.S. Military Academy at West Point. My mother told me that she would finish paying off the car and return it to me if I would go to the Academy, and graduate.

She kept her promise, but in the ensuing years, she drove the car to work at Patrick Air Force Base which is located right on the Atlantic Ocean. The car rusted to pieces. My friends and family urged me to pay the junk man $25 to come and pick it up. I knew way back then that this Camaro was a keeper! In June of 1977, during a two month leave from the Army after graduation from West Point, I focused on squeezing more performance out of it.

I added Hooker headers, a radical Sig Erson cam, an Edelbrock high rise intake, and a Holley double pumper carb. This required a giant hole be cut in the hood. By now, this was my second car, so I didn’t need it as a daily driver (my driver was now a new 1977 Trans Am with the infamous Oldsmobile 403 engine. I traded this in the next year for a new 1978 Trans Am with T-tops and the Pontiac 400 engine – yes, I still have it, too). I left the ’71 Camaro in a friend’s garage in 1979, when I was sent to Germany for a three year tour. When I returned in 1982, I began a twenty-year mission to undo the things I did to the car in the summer of 1977. 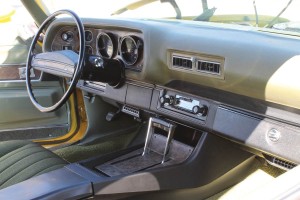 In 1991, I took the car to a friend of mine, Ronny Vallario. Ronny was a team member of mine in “A” Company, 3/11 Special Forces Group in Tampa, FL, and he also happened to own Superior Auto Body in Pinellas Park. Ronny did a beautiful job of restoring and repainting the car. He refused to replace the original vinyl roof, because of the tendency in Florida for them to accumulate water and destroy the body. Instead, he added Z/28 stripes. He said I would love the final result, and he was right. Last year, I took the car back to Ronny and asked him to take it to the next level, but not quite Concours, since I knew I’d be driving it as much as I could. While the car was at Ronny’s shop, a local Chevy big block expert, Dave Carlson, pulled the engine and refreshed it, giving it new life, along with a set of roller rockers. I still have all the original documentation for this car, including the Protect-O-Plate, the bill of sale, the pink copy of the window sticker, the order sheet, the original inspection sheet, and even the first registration. 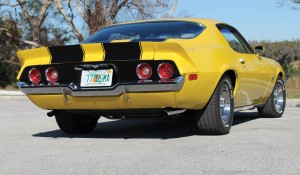 In fact, in 2008, at a car show at the Jim Rathmann dealership, Mr. Rathmann admired my car, checked out my paperwork, and noted that the sales manager was living in Arizona. He asked if he could have a copy of the sales manager’s letter to me. I said of course, especially if he would autograph my copy, which he cheerfully did.

I’ve driven this Camaro to many shows, including Super Chevy in Gainesville, the WCA Winter Nationals in Old Town, Kissimmee, the Westlake Resort in Orlando for the Chevy Classics Winter National Show, the Thanksgiving Turkey Run at Daytona International Speedway, and even to the F-Body Gathering in Atlanta on Memorial Day weekend. While not a Concours restoration, it is a fun car to drive, and I drive it wherever and whenever I like. Oh, and the air conditioning is still keeping me cool in Florida!