You may have heard about General Motors engineer Mark Stielow’s 1969 Camaro “Red Devil” before. It’s a fully custom Pro Touring Camaro packing a 7.0-liter LS7 under its hood which is garnished with the cylinder heads, valvetrain and supercharger from a Corvette ZR1. Underneath, it’s equipped with a 3.25:1 nine-inch axle, a limited-slip differential and a full Detroit Speed suspension system. He’s since sold the car, but back in 2012 when it was still around, him and Hot Rod magazine pitted it against a brand new Camaro ZL1 in a time-attack style race. 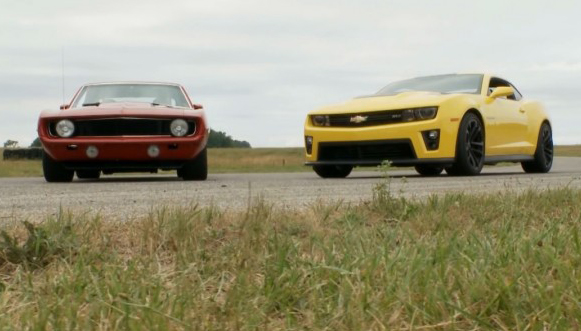 It should be said that Stielow’s Camaro is more than a just a 756 horsepower restomod. It’s a corning carving monster, with sticky Goodyear Eagle F1 tires, a Detroit Speed subframe and Brembo brakes with drilled rotors nicked from the Corvette Z06. It should stand a pretty good chance at beating the ZL1 around GingerMan Raceway, then. Check out the video below to find out which Camaro prevails in this shootout. It should also be noted that he sold it since the time of this video.