1969 Camaro RS owner Rick Aron was driving home from an afternoon cruise when he had to make a sudden stop. He quickly discovered that after driving the Camaro for several years, his drum brakes were due for an upgrade. His first call was to Rick’s Camaros for a front disc upgrade kit. While discussing this upgrade with his fellow Northwest Arkansas Camaro Club buddies, they also mused about the original engine and transmission that was showing signs of wear and tear. A buddy suggested rebuilding the engine as a club project. Finally, although the Camaro was appealing in silver with black stripes and a vinyl top, there were tell tale signs that the paint needed some attention too. That nasty moisture under the vinyl top had reared its ugly head and rust bubbles were starting to make an appearance. It was settled– time for a frame-up restoration. 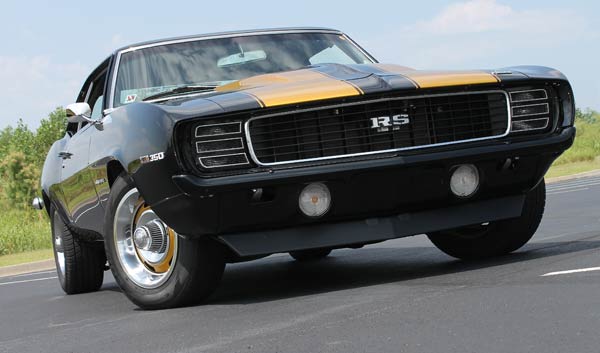 The Right Stuff front disc brake kit was installed to provide that needed confidence in the braking department. The numbers-matching 350 engine and Turbo 350 transmission were pulled and completely rebuilt. Edelbrock Performer intake and carb were mated to the motor, hideaway headlight system was refurbished, a fresh coat of paint was laid down in the engine bay and the motor and transmission were dropped back in. Looking for something a bit different than “the usual” chrome on the motor, Rick wanted to tie the body color combination through to the engine. He searched for anodized gold, but came up empty. When you cannot find what you’re looking for, why not create it? 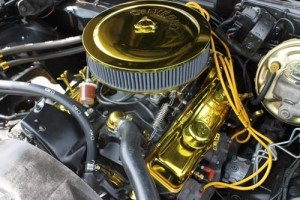 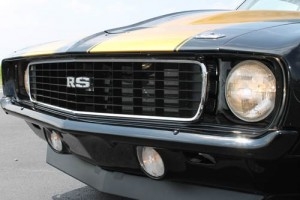 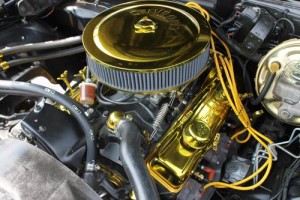 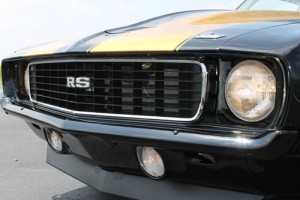 With the help of engine chrome from Rick’s Camaros and Metalcast paint from Duplicolor, gold chrome was created for the engine. Engine complete. On to the body! 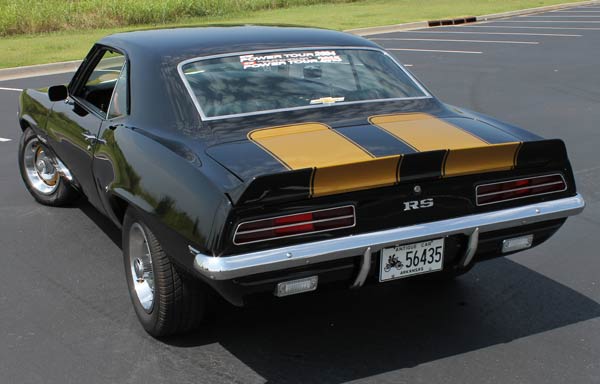 In the back of Rick’s mind, he had a picture he’d seen a decade earlier from an old Goodyear ad showing a black and gold ’69 Camaro with gold Rally rims. He now had the basis to build on. Black– easy color to pick out, but what shade of gold? Again reaching back to 2002, he remembered a gold Plymouth Prowler he’d spotted on a local boulevard. At some point in his life, Rick knew some vehicle of his would have Inca Gold on it. Color combo done.

Rick then turned to his friend, Brian at Brian’s Custom Paint and Body in Anderson, MO, to complete the body work and lay down the black and gold combo. Removing the vinyl top for the final time revealed a bit more rust and a few pinholes that were not worth patching. Time to get out the cutting tool, fabricate some patch panels, and install new AMD (Auto Metal Direct) roof skin from Rick’s Camaro. Upon removing the several layers of decades old paint, past the original Hunter Green color, they discovered a poorly repaired driver’s side fender courtesy of a previous owner. Back to Rick’s Camaro for a new AMD fender. Brian finally laid down a perfect coat of black and Inca Gold and the project could see the light at the end of the tunnel. 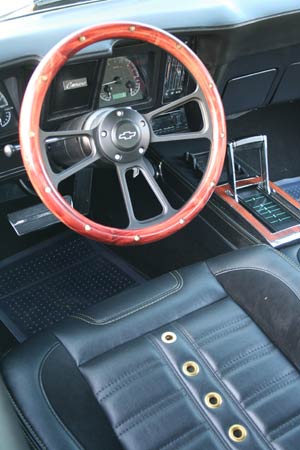 Rick then turned to Steel Rubber Products for all the weather stripping and rubber body gaskets. Back to Rick’s Camaro for all the body emblems and trim work. Last but certainly not least, he turned his attention to the interior. Wrestling with the decision to go stock or custom, Rick did extensive research while at the SEMA show. One manufacturer continued to grab his attention, bringing comfort and custom together– TMI Industries. Rick reached out to Waylon Krumrie at TMI to discuss the color and design. They settled in on the Sport XR Series. Rick wanted to carry the gold and black theme throughout the interior, so they decided to use black vinyl and black suede inserts with custom gold stitching and gold grommets. Rick was one of the first to have the one-piece molded headliner from TMI. He then turned to Robert Garza from Hog City Customs in Springdale, AR for the install of the TMI custom interior and Pioneer tunes. A Forever Sharp wood steering wheel was mounted and Rick then wrapped up the project with Dakota Digital and their VHX Series gauges. The VHX Series brings an old school analog look with the accuracy and dependability of modern technology.

The restoration was wrapped up just in time for Rick and his wife Joan to participate in the 2015 Hot Rod Power Tour. Shortly after that, in July, the Camaro scored a Platinum Award at Chevy Classics’ 38th Annual Convention in Norman, OK. We think you’ll agree that the mission was accomplished– a complete transformation retaining some originality and adding a custom touch, resulting in a true “Highway Star”. 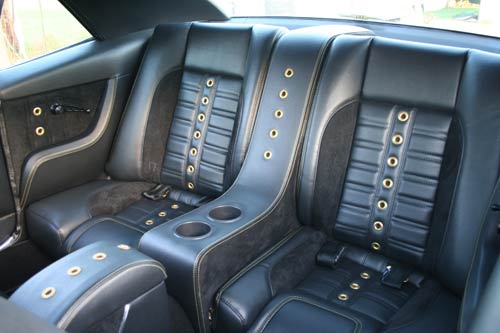